Half a Decade of Scavenging, Rivalry, and Glory | Function Point

The fp. Hunt: Half a Decade of Scavenging, Rivalry, and Glory

Each summer at Function Point we get sorted into cross-departmental teams and have a day to mind-melt with people we don’t usually work with while competing in our annual scavenger hunt. The fierce competition, the mentally challenging riddles, the serious amount of team chirping— it can be a daunting experience for even the most veteran Function Pointers.

The date was August 25th, 2016. I remember it like it was yesterday. I woke up at 6:30am, beating my alarm by a cool thirty minutes. Usually I would’ve spent the next 5 to 10 minutes scrolling through Instagram, but not this morning. This morning felt different.

And indeed, it was a special day. My hand reached towards my bedside table, but instead of landing on my cell phone, it gravitated towards a bright, pristine pink bandana. Function Point’s 5th Annual Scavenger Hunt had finally arrived, and I was in for a full nail-biting, knee-shaking, hand-covering-eyes, fun-filled adventure.

Everyone gazed up at the organizers standing on the table. “Greetings, and welcome. Listen very carefully,” they instructed. The air of formality was an indication of what kind of serious competition this Scavenger Hunt would be. We were told that each team was about to compete for the prize money, but, more importantly, all the glory and year-long bragging rights awarded to the owners of the coveted Winner’s trophy.

My team (Team Pink) was handed a clean, crisp envelope. In it: our first instructions that seemed to grow more and more cryptic as we read them. A rookie-panic washed over me as I caught a glimpse of Team Green frolic out the door, bandanas tied tight around their foreheads like warriors. Clearly they had deciphered the first clue, and just like that, the chase was on.

Riddles Fit For a Queen

Not wanting to waste any more time, we dashed to our car, and minutes later (but totally safely) we arrived at Queen Elizabeth Park. The way it worked was simple: we had to run around the park chasing down clues and solving riddles. Once we thought we had solved a riddle, we submitted our answer as a picture or video.

One moment we were searching high and low at Bloedel Conservatory, keeping our eyes peeled for 8 rare and exotic species of bird. The next, we were wading through a massive showpiece fountain as we tried to count the exact number of sprinklers that laid within.

Then the bravest of us stepped up to receive a pie in the face from a random stranger. The smell of dried whipped cream and sweat still haunts me.

The drive back to the office is still somewhat of a blur, but I remember thinking that the worst was behind us. Boy, was I wrong. After a short pit-stop to regain our wits (and throwback a beer), back into the car we went, this time across water as we embarked on an adventure to Granville Island.

I have been to Granville Island many times before, but I don’t ever remember it being as maze-like as it felt that day. People must’ve thought we were crazy. But if I’m honest, by this point, we were crazy. Crazy enough to slip puppets on our hand and record ourselves putting on a puppet show. Crazy enough to barrel-roll down a hill.

Crazy enough to kiss live shellfish. Crazy enough to do whatever it took to beat the other teams. By this point, the spirit of competition had completely taken over.

Slightly wet and smelling like seafood, we returned to the office where there was still one event left: The Gauntlet. While we had worked together as a team for the past 3 hours, this final hour is where we’d have to rely on each person’s individual strengths.

One person represented their team for each gauntlet event as everyone else stood around to cheer, and chirp:

The sniper shot challenge (with Nerf guns, but that’s beside the point)

The memory game where only the most cardio-inclined individuals succeeded

The sun had set by the time the last challenge was won, and in true Function Point fashion, we finished with a celebration of good food and better company. After all, at the end of the day, we’re all on the same team — but only until the end of the day, because then we find out which team won.

This year Team Green took the cake (and the prize money, and the trophy, and the bragging rights). The good news: we’ve got 350 days to prepare for the next Function Point scavenger hunt.

Check out more photos in the 5th Annual Function Point Scavenger Hunt album. Trust me, these are too good to miss.

Get Started With Function Point

Function Point has helped over 9000 users from around the world simplify their workflows and earn more profit on each project.

Tell us about yourself and we'll be in touch right away. 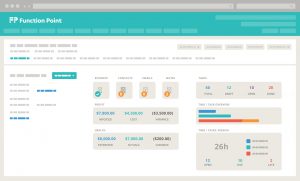 Get Back to the Creative and Out of the Spreadsheet.
Book Your Demo with FP

Get a personalized demo tailored to your business from one of our experts.